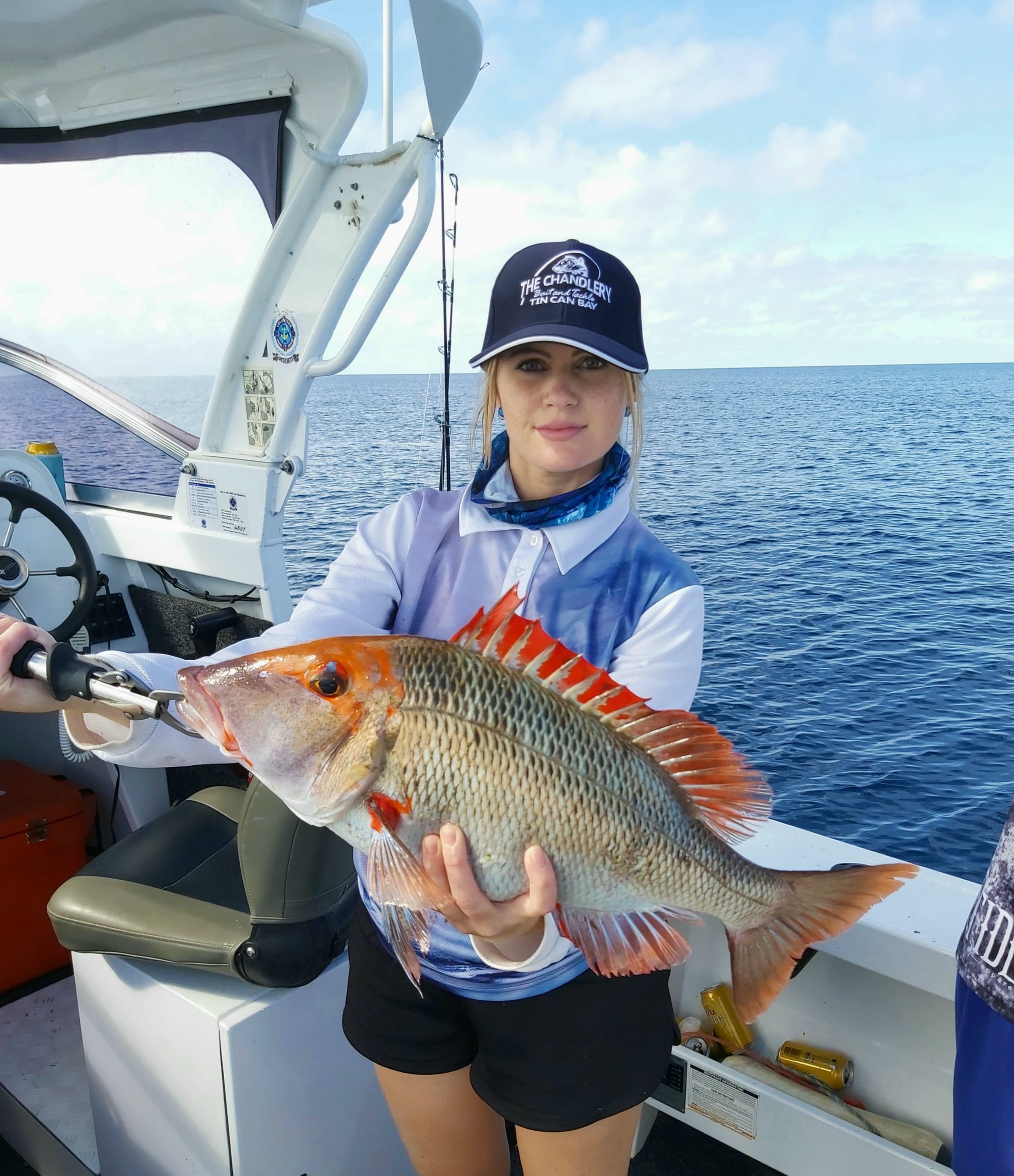 G’day Crew I trust you have all been keeping well and enjoying the winter weather that is here and man have we had some stunning days!  Besides the rain that is falling as I write this and has been falling for the last few days….

So what’s been on the bite the last few weeks?  Well being winter we all know that the squid are on the chew along with the winter whiting and people have been making the most of them that’s for sure.  The cooler water temps have also seen anglers getting into good numbers of Bream.  This makes for good fun on a light spin combo flicking smaller lures in around the mangroves up the creeks or flicking the pylons in Snapper Creek should see you bag a few this time of the year.  For the bait crew try fresh strips of mullet or small prawns lightly weighted and fished back into the structure.

Up the creeks this time of year there are good numbers of Golden Trevally to be caught.  Using your sounder to sound up schools of fish and targeting them with small prawn lures, vibes and even micro jig makes for some good fun on 6lb braid and 14lb leader.  If you have a side scan unit it will pay to use it up the creek as the school may not be under the boat.  I recently sounded a school of fish that was 5m to my starboard side and the school was 20m wide and about 30m long.  I managed to pull three nice 60cm fish out of the school before it moved on.  I end up with 9 fish for the session and 6 of them were over 60cm and all caught on small metal jigs.

If I were not using my side scan, I would not have even known that they were there.  Using your sounder and it’s side scan feature to mark schools of fish can save you time blind casting and improve your catch rate dramatically.  If you want to have a chat about how side scan works pop down for a yarn and we will be happy to interpret and explain what we see on the screen.

The flathead have been pretty tricky the last few weeks with the clarity of the water being crystal clear.  Fishing longer leaders and getting a good long cast combined with a stealthy approach are going to be needed to trick them into eating your offerings.  One of the stand out plastics lately would have to be the 4’’ Biwaa Deus in Pearl White & Pink Ice, rigged on either a 2/0-3/0 TT 1/4oz jig head.

Sand Crabs are on the march in The Bay, so now is the time to get the drop dillies out and do a little prospecting for some Blue Swimmers in the channel.  Whiting frames would be my pick of baits for these tasty guys.  Mud Crabs are also around but a little doughy with the cooler water, they have been rather good quality though.  Crabbing at the back of the bay, in the shallows, around the full moon has been producing the better Muddies.

We have seen masses of bait fish turning up in TCB the last couple of weeks and there have been some good schools of Mac Tuna & Watsons Leaping Bonito’s terrorising the bait ball.  We’ve seen this action throughout The Bay from Inskip right down past the powerlines.  There have also been some nice catches of School Mackerel in the mix.

If you are keen to go hit the beach the reports are of good whiting, bream, and some thumper dart getting around.  So now is the time to grab the rods get down there and get a feed.  Why not try your hand at getting a few worms off the beach or if that’s too hard, pop and grab some of our locally caught and cured worms.  The Tailor should be starting to fill the gutters too.  Surprisingly, a couple of decent Mangrove Jacks were caught off Rainbow Beach by Whiting Fishos.  I could not believe my eyes when I saw it on a Facebook post a few weeks ago

Offshore there were some great catches of Emperor, Snapper & Pearlies early in the month before the closure.  Anyone that has been getting out since have said that the tuskies, moses, husser & RTE have all been on the chew and filling the icebox

Well that’s it from me this month Crew, stay safe & healthy, keep warm and get out and have a fish!!

Find us at the Tin Can Bay Marina, Emperor Street for all your boating and fishing needs.